Enhancing Resilience of Customers and Society

The Daigas Group aim to utilize our strengths in solutions and innovation and create value together with stakeholders, thereby enhancing the resilience of our customers and society.

The Daigas Group has developed and uses an “AI radar locator” that allows anyone to easily detect underground pipes with a high degree of accuracy, thanks to the adoption of AI image diagnostic technology. The radar locator emits radio waves toward the ground, and generates survey images based on the reflection of the waves from underground pipes. Operators can then estimate the location of underground pipes by interpreting the shape of the waves in the images. There were cases in which it was difficult to detect locations depending on the status of pipes and the quality of soil, and it required significant technical skill to identify the location of underground pipes with certainty. In this development, however, the AI system that learns the judgment of experienced workers enabled operators to automatically make judgments about the location of underground pipes, without relying on the expertise of them. We will focus on further technical development for enhancing the safety of our gas operations in order to ensure that our customers can continue to use gas safely and with peace of mind.

The Daigas Group manages location information of gas pipes with a mapping system to implement construction, maintenance, and operations. Previously, this location information was expressed in the form of relative coordinates based on geographical features such as roads and rivers on a topographic map. As such, in order to identify the location of gas pipes at sites, it was necessary to measure the distance from the origin of the relative coordinates. There were cases where the location of the origin needed to be changed because of road construction or other reasons, requiring significant labor for maintenance. Now, we have replaced the maps used in our pipe mapping system with high-accuracy and high-resolution aerial photographs with absolute coordinates, thereby proceeding with our efforts to allocate absolute coordinates to gas pipes. As a result, we will be able to identify the location of gas pipes with pinpoint accuracy, even when it has become impossible to identify the origin of relative coordinates due to road expansions or sediment deposition caused by natural disasters, and other reasons.

Using the location information of gas pipes expressed in absolute coordinates, we began a trial operation utilizing AI for gas pipe patrols, jointly with Osaka City Bus Corporation, starting in June 2021. For roads where medium-pressure gas pipes are buried, we have traditionally been taking steps to prevent damage to the gas pipes by operating patrol cars that travel along designated routes every day to detect any construction work in the vicinity of the gas pipes that are not notified to the Group. Now, we have developed a camera that automatically recognizes construction sites by using AI systems, and have installed the camera in route buses along with GPS, thereby making efforts to identify construction works taking place in the vicinity of mediumpressure gas pipes on the bus routes. By so doing, we will be able to increase the frequency of patrols and enhance safety quality, while also increasing the productivity of our operations.

In the future, it will become possible to identify the location of gas pipes even with general-purpose devices such as smartphones, by managing the location information of gas pipes based on absolute coordinates. This also offers the prospect of future transformations in operations, etc. We will continue enhancing the quality of our operations from the perspective of ensuring safety and preventing disasters to improve the resilience of our customers and society. 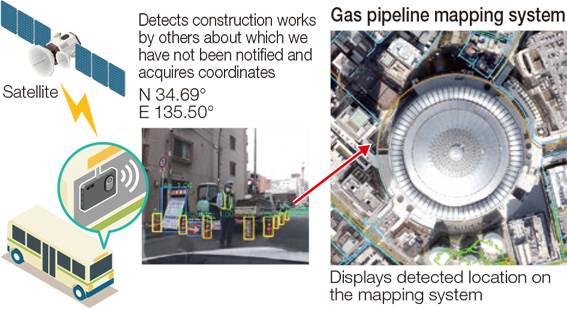 Electricity cannot be stored, so continual adjustments of power generation must be made to ensure a balance between supply and demand. If power generation is not balanced, the frequency of the electricity will fluctuate, potentially resulting in large-scale power outages, in the worst-case scenario. As a result, general electricity transmission and distribution utilities currently maintain frequencies within a certain range, mainly by limiting the output of power stations to match demand.

Renewable energy, which does not generate CO2 when electricity is generated, may become a key energy source in future under Japan’s energy policies. Still, solar power generation and wind power generation are affected by weather conditions such as the amount of solar radiation and strength of the wind, causing issues when adjusting the balance of grid electricity supply and demand. On the other hand, fuel cells have the characteristic of being able to freely control the output of power, and are attracting attention as a resource that can contribute to the adjustment of grid electricity supply and demand in a society in which a large amount of renewable energy is introduced.

Innovation by the Daigas Group

Osaka Gas is conducting a verification project to build a virtual power plant (VPP)*1 that controls approximately 3,600 units of the residential fuel cell system, “ENE-FARM,” installed at customers’ homes (a total potential supply capacity*2 of around 1 MW) as energy resources as if it were a single power plant, so as to utilize it for effective adjustment of grid electricity supply and demand and for avoiding imbalance in the grid. While the aggregation coordinator*3 in this verification project is ENERES Co., Ltd., Osaka Gas participates in the project as a resource aggregator*4.

In the previous fiscal year, the Company participated in a verification project for a VPP that involved verifying the operation of over 1,500 ENE-FARM units. This fiscal year, we intend to conduct a technical verification that aims to provide adjustment capabilities with the use of approximately 3,600 ENE-FARM units, exceeding the previous fiscal year, while also aiming to enhance the accuracy of controlling ENEFARM units remotely in accordance with the supply-demand balance in the grid. Additionally, it has been required to avoid imbalances of renewable energy ahead of the introduction of the FIP scheme. Therefore, in this verification, the Company will verify the technology used to avoid imbalances by controlling the power generated by ENE-FARM units in accordance with the output of power from our Yura Solar Power Plant.