Technology that Contributes to the SDGs

Radiative cooling materials are expected to contribute to saving energy and preventing global warming because they reduce the internal air-conditioning load when used on the exterior walls of buildings, car bodies, etc.

Innovation by the Daigas Group 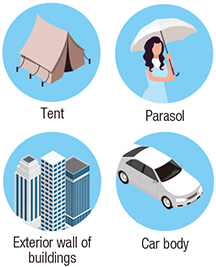 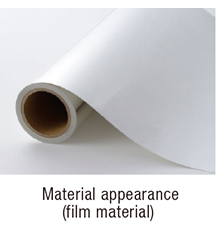 “Radiative cooling” refers to the cooling effect when heat on earth is released into space as a kind of light called thermal radiation.* This effect is well known as the reason temperature falls at night, but in fact, it also occurs during the day. During the day, however, the temperature of metal and concrete rises above the ambient temperature because the heat energy input from sunlight is greater than the energy radiated through thermal radiation. Traditional methods of combating heat generally relied on the use of materials to block light, paints that reflect solar radiation, etc., but although these methods limited the increase in temperature by blocking light and reflecting sunlight, the materials themselves absorbed heat and became warmer than the ambient temperature. At Osaka Gas, we focused on the fact that the temperature of a material will be cooler than surrounding temperatures if the energy radiated is greater than the heat energy input. As a result, we succeeded in developing radiative cooling materials that utilize our expertise in optical and thermal radiation controls. It has been confirmed that the temperature of these materials falls to 2 - 6℃ lower than the ambient temperature, even under direct sunlight. Going forward, we intend to test the durability and other aspects of these materials.