To develop in a more organized and continual fashion the welfare activities that the Daigas Group has carried out through the “Small Light Campaign” launched in 1981 (the UN International Year of Disabled Persons) as a company volunteer effort, 362 companies including Osaka Gas and affiliate companies, the associations comprised of contracted companies providing sales of gas appliances and other services, pipe working joined together in October 1985 to establish and fund the Osaka Gas Group Welfare Foundation in honor of Osaka Gas' 80th anniversary. The Foundation is involved in subsidizing local welfare activities for the elderly and surveys/research conducted by universities and medical institutions, and in promoting fitness efforts aimed at helping senior citizens maintain and improve their health.

In September 1992, the Osaka Gas International Exchange Foundation was founded and fully funded by Osaka Gas, and in October 2010 the Foundation was granted authorization by the Cabinet Office to transition into a public interest incorporated foundation. The Foundation now works to deepen mutual understanding with natural gas producing countries and to make international contributions through the foundation's business activities, as well as provide subsidies that help ensure reliable supplies of natural gas.

Set up in 1985 through the contribution of Daigas Group companies, the Osaka Gas Group Welfare Foundation operates in six prefectures of the Kansai region, mainly engaging in (1) funding welfare projects, (2) researching and surveying the elderly population and (3) supporting health-promotion projects to help maintain and improve the health of the elderly.
In FY2022, the Foundation provided 6.96 million yen in subsidies to 59 welfare projects for the elderly, and 9.18 million yen in subsidies to 13 investigation and research projects, and carried out 51 health-promotion projects involving 1,432 participants.

In FY2023, the Foundation’s targets are to provide 7.0 million yen to welfare projects for the elderly, 8.0 million yen to investigation and research projects, and carry out 103 health-promotion projects involving 2,830 participants.

■ (1) Funding to Enhance the Welfare of the Elderly

■ (2) Funding for Research and Surveys

Stakeholder Comment: Striving to Build a Sense of Community 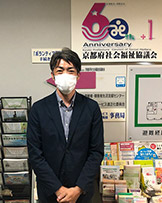 I would like to express my great appreciation for the efforts your foundation has made since 1985 to help build a community for an aging society by providing assistance for welfare programs for the elderly, activities for encouraging them to participate in society, and other activities.

Three years have passed since the onset of the COVID-19 pandemic, and as the environment surrounding the community is changing rapidly, it is important to catch up with the issues that have emerged and are being faced by local residents, and the cooperation of not only professionals but also local residents and community activists is essential for this.

To make this possible, it is important to create a place to stay in the community, to build connections, and to foster a community culture that respects diversity. The Social Welfare Council is more than ever required to conduct community welfare activities with an eye toward life with the coronavirus and after the coronavirus.

Organizations in Kyoto Prefecture that have received subsidies from your foundation have been promoting activities to raise awareness about dementia, etc. through exchanges at elderly facilities, aiming at creating a community where everyone can live with peace of mind.

Our Council will continue working to achieve its basic principles: To create a society where everyone can live with dignity while connecting with others. We sincerely ask for your continued support of these community welfare efforts.

In Malaysia, the Foundation provided assistance totaling 4.38 million yen for a range of programs, including experimental research being conducted at Universiti Malaysia Sarawak, and for scholarships to 12 students. Total assistance over the 29 years since the establishment of the foundation in 1992 is now approximately 570.51 million yen. A total of 10,212 people have received scholarships, while the number of subsidized research themes comes to 417.

When the Indian Ocean earthquake and tsunami occurred off the coast of Sumatra in 2004, the Foundation provided a subsidy to help operate Yayasan Jambo Minda, a foundation established in heavily damaged Aceh Province as its reconstruction base. The Foundation also subsidized the purchase by the Aceh Province of stationery and books while financing disaster-prevention education, which focused on emergency anti-tsunami response actions, conducted by the province.

In the future, through assistance in this region, we will continue to act to deepen mutual understanding between our countries and contribute to international goodwill.

An industrial human resource development project for the Democratic Republic of East Timor-Leste, which was launched by Osaka Gas, the Osaka Gas Foundation of International Cultural Exchange, and the Japan International Cooperation Agency (JICA) in FY2013, has entered its ninth year. In FY2022, combined scholarship of 1.71million yen was granted to 30 students studying at the National University of Timor-Leste, as was done in the previous years.

The Foundation, for its part, is in charge of implementing and monitoring the project. JICA is in charge of coordinating with the National University of Timor-Leste and helps it implement the project, by taking advantage of its reputation from past achievements and its human networks in East Timor.

In addition, it is expected that the project to enhance the understanding of those in East Timor involved in the project regarding Japan's business, industry and academia.

The Foundation will continue to contribute to the development of East Timor while playing an important role in strengthening friendly ties between Japan and East Timor and fostering international goodwill.