We act in accordance with the Daigas Group Charter of Business Conduct to contribute to the realization of a sustainable society.

The Daigas Group strives to become a company that promotes the growth of its employees through work by enhancing its personnel system to respect individuality and initiative and creating an environment in which the safety and physical/mental health of employees are ensured and diverse talent can play an active role.

In addition to the system for “Employee Capacity Development,” the Daigas Group has established the Daigas Group Safety and Health Council to discuss measures for and share information about industrial accident prevention and health maintenance and enhancement. 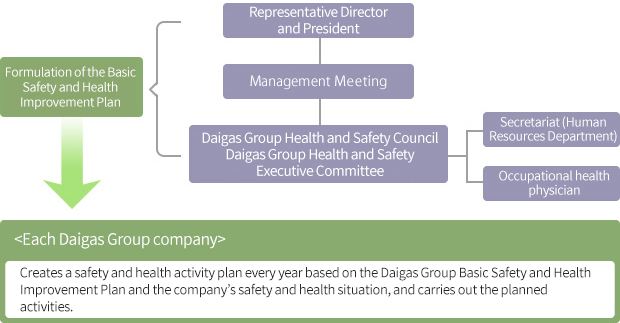 In the Daigas Group Corporate Principles, the Group declares its aim to create “value for society,” “value for shareholders,” and “value for employees,” as well as “value for customers,” its top priority. We believe that developing human and intellectual capital is a source of value creation. The Daigas Group's Long-Term Management Vision 2030 lists the promotion of work style reform and development of human resources as important goals to be attained by that year. We consider it vital to develop personnel who are capable of working actively in a rapidly changing business environment, and to that end we offer a range of training and educational programs aimed at developing individual capabilities.

The Daigas Group Code of Business Conduct includes our intention to create a workplace where employees can work peacefully. The Group is committed to respecting the individuality of its employees and developing their careers and skills to enable diverse personnel to reach their full potential.

The personnel system of Osaka Gas helps all employees understand their roles and expectations through meetings with their managers, who serve as personnel development advisors, and allows employees to choose their own development course to pursue. We offer a wide range of training programs for all positions and job descriptions, in addition to the training system for each development course. These include training programs by level junior/new, mid-level, managerial, etc., along with self-directed training. Overseas business training is also provided to develop personnel who can play an active role globally.

Regarding employees’ capacity development, a follow-up and an evaluation are conducted periodically through an interview with a supervisor, etc. based on management by objectives (MBO) to encourage and motivate each employee to achieve growth on a voluntary basis and formulate a development plan toward the future. The average hours of training per year per employee in FY2022 were as follows.

In FY2022, the method of implementing respective training programs was reviewed following the previous year due to the COVID-19 pandemic. To produce substantial results through online training, planning and operation of training have been optimized to develop human resources who can cope with the rapidly changing business environment. E-learning programs for developing DX human resources were also launched.

In order to expand into new fields of business, it is vital to build a corporate infrastructure that promotes diversity and allows everyone to participate. The Daigas Group recognizes the need for the Group to foster a corporate culture that encourages the free expression of opinions and a transformation into a corporate entity that promotes diversity in its ranks and corporate structure in a way that encourages employees to maximize their potential, irrespective of gender, age, physical ability, or nationality. This intention is spelled out in the Daigas Group Diversity Promotion Policy.

Achievement of diversity and inclusion (Percentage of female executives, women promoted to management positions, and women hired for career-track positions)

The Daigas Group has formulated the Daigas Group Diversity Promotion Policy with the aim of creating a strong organization that can create new value. The Policy guides us to be a corporate group that can accept diverse values by respecting and approving diverse human resources without discrimination.

In the area of diversity and equal opportunity, we take action across the organization in line with the UN Global Compact, related laws, and the Daigas Group Diversity Promotion Policy to make improvements in recruitment, the development of human resources, and the workplace environment.

At Osaka Gas, efforts to empower women have been promoted to attain targets set for 2030. In FY2022, the company reviewed the evaluation of the results of efforts made in respective layers and opinions obtained through interviews, etc. and endeavored to reflect them in respective measures.
In FY2022, the percentage of female executives, women promoted to career-track management positions, and women hired for career-track positions were 13.3%, 6.3%, and 28.1%, respectively.

The Daigas Group has been working to create an environment where diverse human resources take active roles regardless of gender, age, disability, nationality, form of employment, lifestyle, religion, sexual orientation, and gender identity.
Osaka Gas was selected for the Nadeshiko Brand in FY2022 because it was highly evaluated for the following main measures implemented.

1. Implementation of career education (including balancing of work and childcare)
2. Creation of an environment where life events do not disrupt career
3. Enhancement of recruitment activities for female students

Click here for further information on the employment situation