As a way of enhancing its corporate value, the Daigas Group believes that it is essential for the Group to promote diversity in its corporate membership and corporate structure whereby employees can maximize their potential, irrespective of gender, age, nationality or physical disability. Recognizing that it is necessary for the Group to foster a corporate culture, the Group has adopted the Daigas Group Diversity Promotion Policy aiming for people with diverse personality and talent are respected, accepted, they can feel rewarded and fulfilled through their work.

As the working population is expected to decline in Japan, Osaka Gas believes it important to accept diverse values and has been striving to create a work environment where women can exercise their abilities and play active roles. With their aptitude and wishes taken into account, women have been displaying their abilities in various fields. We revised the Daigas Group Diversity Promotion Policy in FY2022, in accordance with which we will implement various measures, including institutional reforms, to achieve the numerical targets set forth in the revised Policy, such as increasing the percentage of women on the board to 20% or higher and the percentage of women among career-track employees promoted to managerial positions* to 30% or higher by FY2031 and maintaining the percentage of women among career-track hires at 30% or higher. We have made various efforts to achieve a healthy work-life balance and taken measures for career development. These endeavors have led to a steady increase in the percentage of women in management positions.

In FY2022, Osaka Gas won the “Eruboshi” (highest level) certification from the Minister of Health, Labor and Welfare as an excellent company in terms of the status of women’s participation and advancement in accordance with the Act on the Promotion of Women’s Participation and Advancement in the Workplace. Osaka Gas was also selected for the Nadeshiko Brand by the Tokyo Stock Exchange (TSE) and the Ministry of Economy, Trade and Industry as one of the TSE-listed companies which actively promote the utilization of female human resources, including the development of an environment where women can continue to work.

Osaka Gas has also been selected as a constituent of the MSCI Japan Empowering Women Index (WIN), an ESG investment index for Japanese stocks adopted by the Government Pension Investment Fund (GPIF).

Click here for more information on our action plan in response to the Act on Raising the Next Generation and for the further empowerment of women. (Japanese version only)

Click here for further information on the PRIDE Index. (Japanese version only)

Click here for more information on Osaka Gas being selected as a Nadeshiko Brand. (Japanese version only)

■ Change in the Percentage of Women in Managerial Positions (Osaka Gas)*

The target of 5% or more for the percentage of women in managerial positions was attained by FY2021.

Click here for further information on an action plan to empower women. (Japanese version only)

■ Number of Participants in Training for Newly Appointed Managers/Supervisors

■ Number of Participants in Mentoring Program

Click here for further information on empowerment of female workers.

Creating a Work Environment for the Disabled

Osaka Gas does all it can to hire disabled persons and creates a work environment conducive to the talents of each individual. As a result of these efforts, disabled persons accounted for 2.45% of our workforce as of June 2022, well above the legal minimum of 2.3%. Of the 33 Group companies subjected to the law, sixteen companies including Osaka Gas have achieved the legal minimum. 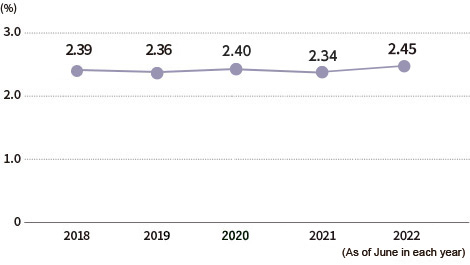 Creating a Work Environment for Seniors

Creating a Work Environment for Seniors

Osaka Gas has implemented a reemployment scheme to rehire employees who have reached mandatory retirement age, under which applicants are placed in jobs that match their skills and preferences. All Daigas Group companies have similar reemployment programs.

Click here for further information on the reemployment scheme.

This training offers the employees briefings on circumstances inside and outside the company as well as various support systems, and through closer examinations of their work histories and group discussions, the employees are encouraged to seek out career paths that are consistent with their values and motivation and to develop their own career plans. After the training, each employee will fill out a career track questionnaire and then attend a one-on-one interview with an in-house career counselor to discuss their career aspirations and growth plans. About 240 employees received career development interviews in FY2022.

When employees reach the age of 54, they are invited to attend a “Nice Life Seminar” with their spouse. They are briefed about various systems that may affect their post-retirement life plans.