Ensuring safety and security in providing gas services to customers is a city gas provider's mission. Osaka Gas conducts periodical checks and inspections of gas facilities set up on the customers' site. The company has also put in place more advanced safety measures against possible large-scale earthquakes and other disasters. In order that customers can use gas with peace of mind, Osaka Gas also strives to disseminate information and to enhance the safety of equipment and services and promote their spread.

Products and Services Ensure Safe Use by Customers

To ensure that customers can use their gas appliances with peace of mind, we take every opportunity to talk to them about the safety of their appliances: during regular safety inspections, when providing a new gas service, and when conducting repairs.

The Osaka Gas website has a section with important announcements on gas appliances, where we talk about the proper use of gas appliances, and post prompt notices about product modifications or defects.

Developing and promoting the use of safer gas appliances

Osaka Gas strives to bring customers products and services that ensure the safe use of gas.

Osaka Gas would like to remove from the market all old gas appliances that lack safety mechanisms. In particular, we visit customers who are still using old appliances that are not equipped with incomplete combustion prevention devices, such as small tankless gas water heaters and wire-mesh gas stoves, and recommend that customers upgrade to safer gas appliances.

To promote the safer use of gas, in 1992 we developed an automatic shut-off device for gas stoves and in 1999 a small gas water boiler with interlock mechanism*.

To eradicate fires originating from gas stoves, since April 2008 all products have been equipped with an auto shut-off function to automatically turn off the gas when the user forgets to. We have been working to spread the use of this product, called the “Si” Sensor-Equipped Cooking Stove. We also provide gas alarm systems that warn residents of a gas leak or carbon monoxide, and offer a range of safety-related services, including the dispatch of staff to a home when trouble is detected.

As of 1999, 86.9% of gas stoves in Osaka Gas’s service area had this auto shut-off safety feature and the number has been increasing ever since. In FY2022, it reached 96.3%. Almost all new models have this feature.

Osaka Gas has developed a new safer and securer gas stove named AVANCE*1 in cooperation with Paloma Co., Ltd. to reduce users’ anxiety about clothing catching fire*2 during cooking. The product has been on the market since June 2019.

The new gas stove is equipped with area sensors*3, an industry-first technology. When a sleeve or other object comes close to the flame, the sensors detect it, lower the flame automatically, and sound a voice alert.

For many years, Osaka Gas has developed technologies to improve the safety of gas stoves such as top burner overheat protection control pilot safety shut-off device, incorporating these devices into our products in stages. Osaka Gas hopes to further increase customers’ safety by adding the area sensors.

Click here for details about the news that the Si-sensor stove AVANCE won the Excellent Award (Minister of Economy, Trade and Industry Award) in the 13th Kids Design Award. (Japanese version only)

Click here for details on the news that the Si-sensor stove AVANCE was recommended as a fire-prevention and disaster-management product, the first time for a cooking device. (Japanese version only)

Recommending replacement for gas appliances not equipped with safety devices

In FY2008, Osaka Gas began replacing customers’ gas appliances not equipped with incomplete combustion prevention devices to prevent accidents involving carbon monoxide poisoning.In addition to recommending appliance replacement for greater safety at every opportunity in daily business activities, rounds were set up to visit individual customers and information was distributed through direct mail, newspaper advertisements, and flyers handed out by meter readers to warn people of the dangers of carbon monoxide poisoning. In addition, the company has been subsidizing the cost of replacement.

For the remaining older gas appliances that have not yet been replaced, we will continue to recommend replacement at every opportunity and encourage customers by direct mail. 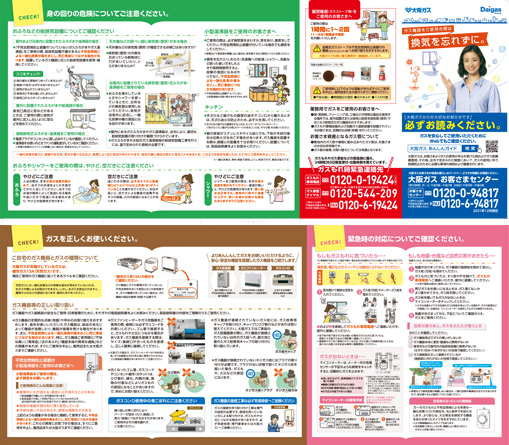 By providing various services, Osaka Gas has helped people continue their daily life safely and without concern, even in the event of an accident.

In response to home fire alarms now mandatory under Japan's revised Fire Defense Law, we launched the “Kemu Piko” home fire alarm system, which is installed in bedrooms and stairways as smoke detectors. We also offer home security systems such as “Osaka Gas SP (Security Partner)” in which homes are connected through the Internet to our monitoring center, which dispatches staff when problems are detected. In October 2017, we launched “Miru Piko,” a new gas safety service, by integrating “Ru Ru Ru Call M” and “Kuru Piko,” both operated through telecommunication devices to ensure the safety and security of gas appliances. The new service will be incorporated into our “Sumikata Service,” a one-stop home support service we have developed to address problems facing customers regarding their housing facilities, with the aim of ensuring their housing safety and security.

In May 2016, we began offering fire extinguishers for household use as part of our further efforts to ensure the safety and security of customers' lives. The agent used in the fire extinguishers is not powder but liquid, rendering them environmentally-friendly and safer for our health, and making cleaning after injection easier. Compact in size, the extinguisher is easy to install and has many color variations.

Osaka Gas signed an agreement with the Osaka Municipal Fire Department in February 2019 to cooperate on fire prevention education. Under the agreement, the two parties will work together to promote the installation of residential fire alarms and the replacement of old ones that were installed 10 or more years ago.

For this reason, fire alarms are required by law to be installed in all housing units.*2

Osaka Gas has been selling the Kemupiko residential fire alarm system since 2006. We keep track of the replacement date for customers who have the Kemupiko system installed and inform them when the time for replacement approaches.

In FY2020, the Company also signed similar agreements with the Kyoto, Kobe and Sakai Municipal Fire Departments. In cooperation with these municipal fire departments, Osaka Gas intends to reach out to users of residential fire alarms from other manufacturers to widely publicize the need to maintain and replace old residential fire alarm systems and ensure that all systems function properly when they are needed most. We will continue to promote the use of residential fire alarms and the replacement of out-of-date ones, thereby reducing fatalities from being unable to escape in time from residential fires, which contributes to a safe and secure living environment.

Major activities decided upon in the Agreement on Cooperative Educational Activities on Fire Prevention:

For more details, click here for the press release “Osaka Gas and the Cities of Kyoto and Kobe Conclude an Agreement on Cooperative Educational Activities on Fire Prevention.”

In addition to the conventional gas leak and CO detection functions, Sumapiko has such functions as providing weather and crime prevention information useful for daily lives and offering family tracking services.

We have also signed the Agreement on Provision of Disaster Information with the Osaka City Government and the Agreement on the Provision of Crime Prevention Information with the Osaka Prefectural Police. Based on the agreements, we receive disaster information from the Osaka City Government and deliver it to users living in the city* in voice form from Sumapiko. For crime prevention information, we receive “Anmachi Mail” issued by the Osaka Prefectural Police and communicate the information as voice messages from Sumapiko.

The Daigas Group aims to improve the safety and security of customers’ homes through collaboration with the Osaka City Government and the Osaka Prefectural Police to disseminate information on disasters and crime prevention.

For more details, click here for the press release “Launch of IoT-compatible Alarm Device ‘Sumapiko’ and Cooperation with the Osaka City Government and the Osaka Prefectural Police Regarding Provision of Disaster and Crime Prevention Information.”

Carbon dioxide poisoning accidents occur every year across Japan in restaurants and drinking establishments because ventilation equipment is either deficient or not used.

Many people work at such establishments, and at times kitchen appliances are used without sufficiently checking if the ventilation equipment is functioning properly. Poor ventilation, whether due to the available equipment not being used or the equipment being inadequate to do the job, leads to accidents.

For this reason, since January 2009 Osaka Gas has rented a ventilation alarm (CO sensor) for commercial gas kitchen appliances at no charge to approximately 100,000 customers who are using commercial gas kitchen equipment (commercial kitchens such as meal-serving inns, bakeries, and food supply facilities), when we deem it necessary.

In light of the effectiveness of these CO sensors for commercial gas kitchen appliances in preventing accidental carbon monoxide poisoning, we plan to continue replacing the units that have been installed and systematically installing new units and renting them at no charge.*

Responding to rising popularity and demand among our customers for environmentally friendly products, whenever the degree of environmental friendliness of a product is printed in our catalog, as a rule we ensure the accuracy by double-checking the manufacturer's claims of the product's performance data and confirming those numbers internally.

As for the safety of products and services offered by Osaka Gas, we are managing their development and quality control as well as labeling and information disclosure in line with the technological standards stipulated under the Gas Business Act and the Law Concerning the Securing of Safety and the Optimization of Transactions of Liquefied Petroleum Gas, and guidelines set by the Japan Industrial Standards (JIS) and the Japan Gas Appliances Inspection Association (JIA) as well as in-house rules.

When there is a product accident or other problem with a gas appliance that Osaka Gas sold, installed, or repaired, we immediately inform the media and place notices in newspapers and on our website. At the same time, we proceed with the inspection of the product in question and if necessary repair it or replace parts.

Response to a problem in FY2022

In FY2022, we made an announcement and took action on "Voluntary parts replacement work for 'gas bath boilers and hot water supply and heating units' made by Purpose Co., Ltd." (changes and additions made to the announcement in FY2020).

We ask for cooperation from customers in our inspections of their gas facilities, which are important for the maintaining safety and security of our service.
During our regular safety patrols* to carry out legally required gas equipment inspections, we check not only the condition of gas equipment and whether there are any gas leaks but also the inflammation of certain appliances, as well as measure the level of carbon monoxide emissions.
We have also been endeavoring to give people reminders on using gas safely.

Osaka Gas believes that the foundation of the gas business is the pursuit of safety by each and every employee. That's the reason behind our "All-Employee Gas Safety Initiative." The initiative is aimed at giving all employees the knowledge to handle customer inquiries about gas and to eliminate the risk of gas accidents caused by leaks and products with no safety features.

The Company intranet offers information about safety measures and basic knowledge about gas and gas appliance safety in order to raise all employees’ awareness and provide them with thorough employee education. Our website has a wealth of ways for employees to learn about safety and provides a training course on how to find gas appliances with no safety device for preventing incomplete combustion and how to recommend that customers replace such appliances.