In recent years, expectations and demand for natural gas have grown from the viewpoint of ensuring energy security. Osaka Gas makes efforts to ensure the stable procurement of LNG and other raw materials by further diversifying procurement sources. We also strive to procure raw materials with market competitiveness by diversifying contract price indicators. When importing LNG and other raw materials from other countries, we work to make the transportation process expeditious, safe and steady by operating LNG tankers, including those owned by us, in an efficient manner.
To ensure the stable procurement of LNG and make our natural gas business profitable, we work on participation in liquefaction projects and gas field development projects.

Believing that it is necessary to take responsible measures in cooperation with our business partners regarding the social and environmental impacts that occur in these series of value chain business processes, we have established the Daigas Group Procurement Policy and informed our business partners of it along with the Daigas Group Procurement Policy for Suppliers.

For LNG sellers with whom we have signed long-term purchase contracts for LNG, we conduct a questionnaire survey to check the status of their policies, initiatives, and information disclosure regarding items of corporate governance, human rights, labor, the environment, and consideration for local communities, referring to the European Commission's Guide for the Oil and Gas Industries concerning the Implementation of the UN Guiding Principles on Business and Human Rights, which was issued in 2013.

Natural gas resources the source of city gas and fuels for power generation are spread worldwide. Osaka Gas started importing LNG from Brunei in 1972 and has since diversified its procurement sources. In December 2019, a natural gas liquefaction project was launched in Texas, the U.S. LNG from the U.S. is procured with a new method, whereby the price is determined in connection with Henry Hub prices, the index upon which the market price for natural gas futures is based in the U.S. This procurement method has been added to Osaka Gas’s existing procurement method, whereby the price is determined by indexing to crude oil prices.

The use of more diverse price indicators will enable us to procure LNG at stable prices even if crude oil prices fluctuate. Moreover, investment in the natural gas liquefaction project will enable us to procure a kind of price-competitive LNG, whose price is closer to prime cost, among the kinds of LNG whose prices are linked to Henry Hub prices. We will continue our efforts to procure more affordable LNG in a more stable manner. 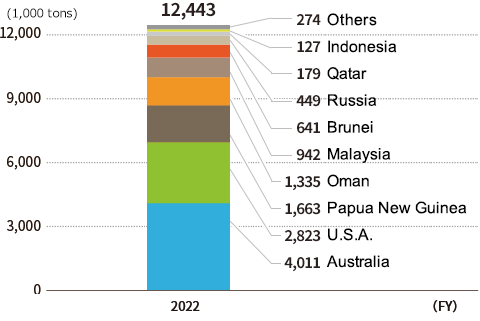 This is the first agreement by a Japanese company to acquire a U.S.-based shale gas developer. Through this agreement, we will position the shale gas development project as a third pillar of our energy business in the U.S., following the Freeport LNG project and a power generation project, to further increase profits.

Sabine owns a mining field of about 1,300 km² (about 320,000 acres) in the eastern part of Texas. In 2021, it produced gas of about 2.8 million tons when converted into LNG from about 900 wells. That is an excellent mining field with the potential for further development for the future.

In July 2018, we acquired a 35% right to a gas field in the eastern area, which is about half of the mining field owned by Sabine. The gas field has brought us a larger production amount and greater profits than we expected when joining the project. This acquisition has enabled us to own Sabine’s entire mining field, including the western area, where many wells in operation are located and producing stable profits.

In addition, since we participated in the project in 2018, cooperation with Sabine has allowed us to confirm Sabine’s great operator skills underpinned by the company’s competent management. This acquisition has enabled us to acquire operatorship that helps us take the initiative in promoting the project in the upstream energy business in the U.S. and consequently to conduct businesses more strategically. In the future, we aim to develop the business efficiently and sustainably with Sabine as a promotor of our upstream energy business in the U.S. by merging the shale gas development division of our U.S.-based subsidiary with Sabine.

Osaka Gas has been striving to secure its LNG transportation capacity using a fleet of eight LNG tankers. Demand for LNG transportation is expected to grow following the scheduled starts of new projects such as the Freeport project in the United States.
Under these circumstances, we will effectively utilize our existing fleet and expand it if necessary to ensure stable and economical source gas procurement and to diffuse the use of natural gas.

In December 2019, the Freeport LNG project in Texas, the U.S., in which Osaka Gas and JERA Co., Inc. have participated through FLNG Liquefaction LLC (hereinafter “the first-train liquefaction company”), was put into commercial operation on the first train of the LNG production equipment.

This project is an LNG project promoted by Freeport LNG as an operator. It liquefies natural gas procured from the U.S. gas market to export the resulting LNG. Osaka Gas and JERA annually receive about 2.32 million tons of LNG each based on the liquefaction and processing agreement with the first-train liquefaction company.

In addition, through LNG procurement from this project, we will secure LNG with no destination restrictions and diversify supply sources and price indicators to ensure stable and flexible LNG procurement.

■ Overview of the Freeport LNG project

For more details, click here for the press release “Start of Commercial Operation at the Freeport LNG Project in Texas.”